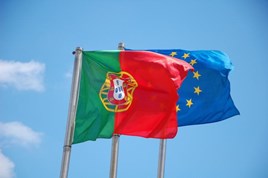 National companies and institutions have already raised more than 1.020 million euros in funding for Research & Innovation (R&I) projects under Horizon 2020 (H2020). With this historic result, Portugal exceeds the very ambitious target of one billion euros of funding that had been set for the Community Framework Programme (FP) to support R&D, which began in 2014 and ends at the end of 2020. The reinforcement of national participation in H2020 is as one of the Government's objectives. The R&D FP has been for decades the European Commission's second-largest programme in budgetary terms after the CAP (Common Agricultural Policy) and aims to make Europe the most competitive economy in the world. It is a highly competitive centrally managed programme, with researchers and companies from all EU member states competing on an equal footing. It has more than a dozen associated countries, such as Switzerland and Israel, and it is considered the "Champions League" because only the best of the best reach the funding.

According to data from the National Innovation Agency (ANI), the Horizon 2020 Framework Programme, which promotes and supports the participation of companies and research institutions in European R&I projects, has approved 2.180 national projects to date, resulting from a total of 15.201 proposals submitted. Portugal thus has a success rate of 14.3%, above the European Union (EU) average of 12.9%. Since 2015, the national success rate for the number of proposals has always been higher than the European average.

"These figures correspond to a rate of return on national funding of 1.66%, a figure higher than the goal of the most optimistic scenario of 1.50% set at the beginning of this Framework Programme”, reveals Manuel Heitor. For the Minister of Science, Technology and Higher Education "the balance of these seven years is very positive, underpinning the national objective of doubling national participation in European competitive programs in the next European FP, where Horizon Europe (2021-2027) is the successor of Horizon 2020, in the next seven years.”.

With an overall budget of over 77 billion euros for the period 2014-2020, Horizon 2020 has this year a call for tender of around 11 billion euros, some still open in the coming months. It is a budget package enhanced with the launch of an additional call for tender to support one of the European Commission's priorities, the Green Deal, which closes in September 2020. This call has an estimated budget of EUR 938M€, and in this call for proposals, Portuguese entities may be able to raise more than two dozen M€, according to our historical success rates in these themes. In this context, the budget achieved by the national entities in H2020 will also increase to values above the one billion already achieved.

Of the 11.000 M€ to be tendered in 2020, only the results corresponding to close to 4.000 M€ have yet to be disclosed by the European Commission and there are still around 7.000 M€ Euros to be financed, of which Portugal should be able to raise more than 100 M€, making 2020 the best year ever for national participation in European FPs, with competitive funding of close to 200 million €.

In this graph, it is possible to see the evolution of national participation since the 6th Framework Programme. Only in 2019, more than 170 M€ were captured (the value of 2020 is partial until the present date):

The following tables summarize the 10 areas of H2020 in which Portuguese entities have obtained the most funding, as well as the companies, higher education institutions and national research centres that have attracted more funding: 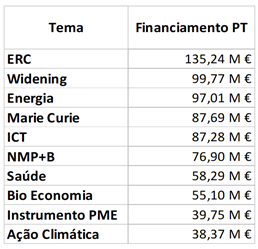 Research Centres were the main national beneficiaries of Horizon 2020, capturing 37.1% of the European funding allocated. Higher education institutions accounted for 26.7%, while small and medium-sized enterprises (SMEs) and large enterprises accounted for 16.7% and 10.3% respectively. The remainder went to public institutions, associations, etc.

The Marie Curie Individual Research Fellowships, which support the mobility of researchers within and outside Europe by helping to attract the best foreign brains to work in the EU in all fields of science, have been the initiative to which most national entities have applied, with a total of 3.000 proposals over six years. This is followed by the "SME Facility" initiatives, a funding package for SMEs, with 1.729 proposals from national companies, and "ICT", with 1.444 national applications. Regarding funding, the European Research Council (ERC) and the Widening (programme to improve the capacity of national scientific systems with a performance below 70% of the European average) are clearly highlighted, with figures in the order of 135 million € and 100 million € respectively.

The importance of the participation of the private sector and of SMEs in the 7 years of H2020 should be stressed. With the participation of a total of 522 companies, 316 of which are SMEs, large companies and SMEs have so far raised 27% of European funding during this period (2014-2020), a figure in line with the European average. Also noteworthy is the role of SMEs, whose participation has retained 62% of the total budget obtained by the private sector, with the top 10 areas with the greatest participation being ICT, Energy, Bio-Economy, Marie Curie, NMP+B, Transport, Climate Action, Security, Health and Space.

For more information, see the detailed data on national participation in Horizon 2020 here.

Summary: The MIA-Portugal project is the result of a partnership between national participants and the University of Newcastle (UK) whose goal is to create a Centre of Excellence for research on ageing. MIA - Multidisciplinary Institute for Ageing has the overall objective of improving the health and well-being of an ageing population by establishing a leading position in active ageing research.

Summary: The ICU4COVID project falls into the category of developing medical technologies and digital tools to improve detection, supervision and care of patients and new technologies that protect health care workers.

Summary: The PASSARO project, part of the public-private partnership for the Clean Sky aviation sector, aims to contribute to the development of multifunctional and intelligent aero structures - lighter, stronger, with a high level of protection and comfort. It also contributes to the automation of production processes and technologies associated with maintenance in an Industry 4.0 approach, improving its production, maintenance and testing efficiency.

Summary: The InterConnect project aims to develop solutions for a digitalisation of an architecture-based electrical system for the Internet of Things (IoT) which, through various digital platforms, and using a universal ontology called SAREF, guarantees interoperability between equipment and systems, while at the same time ensuring the privacy and cyber-security of the data of the different users.

Summary: The Sharing Cities project aims to test a new approach to creating smart cities. By promoting international cooperation between industry and cities, the project seeks to develop affordable solutions that result in commercial solutions with high market potential for smart cities. This project enables citizen involvement and cooperation at local level, strengthening trust between cities and citizens.